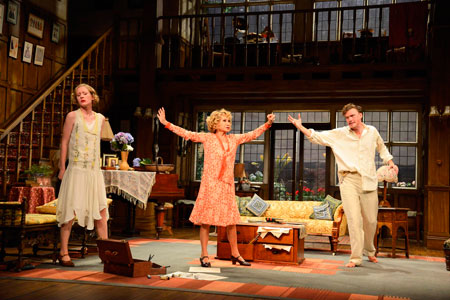 When I arrived at the Duke of York Theatre yesterday I was in for a surprise. I was told by the young man at the gate that they were upgrading some of the ticket holders and I was among them. This is how I managed to get a seat in the 3rd row from the stage.

After seeing Noel Coward’s Private Lives I was looking forward to an opportunity to see his other plays. Hay Fever doesn’t disappoint. Although it was written almost ninety years ago the dialogue sounds still as hilarious as it was when it was written for an audience in 1926. Human nature continues to be the same even though we now live in a world totally transformed by technology.

The play is about the Bliss family (Was the name deliberately chosen to point out their ignorance of human behaviour?) which consists of Mr. Bliss, a novelist and Mrs. Bliss, a retired stage actress and their two adult children. Unknown to the others each one has invited a guest with the hope of spending a few romantic days with them. As the guests arrive one by one we see how they are all totally ill-matched with the one who has invited them. By the end of the second act they have each found a different partner and by the third act the guests realise that the Bliss family is too loony for them and they decide to quietly leave, but not before they have paired off among themselves. The family is too busy with their own conversation to even notice that their guests have left. Not only that but they have totally forgotten all the events of the previous day!

I particularly enjoyed Felicity Kendal’s fantastic stage presence and her very convincing performance. The character she plays, Judith Bliss, has a constant need for drama in her life, never losing an opportunity to be the centre of attention. One can feel Felicity enjoying every moment of this role. To single out Felicity would be unfair to other actors who were all wonderful in their roles. I must add that I was particularly impressed by Alice Orr-Ewing who plays the role of Sorel, the daughter.

The stage set was very beautiful. I loved the way one could see the countryside through the glass windows at the back of the stage. The use of lights to show rain and clouds through the windows was very effective. The women’s costumes were lovely. How I wish women could once again be seen in beautiful dresses like those, instead of the androgynous costumes in neutral colours which are so common now.

I had the wonderful company of a drama student from the university of Cork, who was sitting next to me. I don’t even know her name but we enjoyed trying to guess the end as we waited for the curtain to rise before the play as well as during the interval.

The play ends on 1st August. If you are in London, go catch it before it’s gone. I know that if this play was brought to India it would be a success. 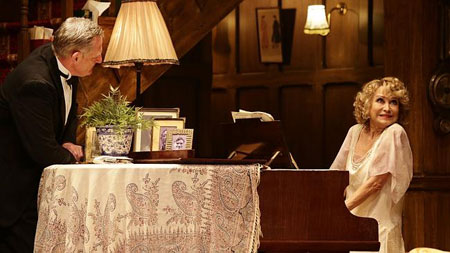 This entry was posted in Theatre and tagged Felicity Kendal, Hay Fever. Bookmark the permalink.