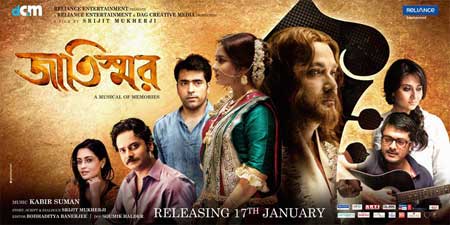 The film I am going to write about was on the list of available Indian regional films on the flight from London Heathrow to Dubai. The special point about watching a film on a flight is that you are a captive audience. Quite literally. Because you can’t go anywhere and there is nothing else you can do, so you are totally absorbed.

The film, Jaatishwar, is surely director Srijit Mukherjee’s best film so far. And I doubt he can actually produce anything that will surpass this film in story and content. At last, Bengal has woken up. And at last there are some producers ready to put their money into these projects.

This film has two tracks and the two tracks meet at the end. The first story is that of a young Gujarati boy (played by Jisshu Sengupata) who is in love with the beautiful Mahamaya. The role of the heroine is played by Swastika whom I last saw in “Bhooter Bhibishyat”. Rohit, the Gujarati boy, follows Mahamaya and wants absolutely to win her over. She finally asks him to write and sing a song in correct Bengali and sing it without a mispronunciation.

Rohit then goes off to continue his studies. His interest is in Music and Portugal. His third interest is in learning Bengali. So the only point where Bengal, music and Portugal meet is in the story of Anthony Firingi. Those who are old enough will remember the 1967 Uttam Kumar film with the soul-stirring songs of Manna Dey. And it may bring back some vague memories about who he was.

The second story begins when Rohit chooses the subject of his dissertation and goes to Chandannagar (also known as Chandernagore). He is in search of the details of the life of Anthony Firingi, the poet and singer of Portuguese origin. At the local library he meets Kushal, an assistant. The meeting between these two men becomes the starting point from which the story of Anthony Firingi grips us. Kushal reveals to Rohit that he was himself Anthony Firingi in his past life and that he has vivid memories which keep coming back to him.

As he recounts his memories of his past life we see Anthony Firingi come alive before us. We see how Anthony was part of the European community living in that area. He was gradually attracted to the Bengali folk culture and ultimately to the musical duel style of “Kobigaan”. Anthony rescues a widow from being burnt on her husband’s funeral pyre and marries her. One year he decides to hold the Durga Puja in his own house but the villagers are totally against this. During the Puja festival he goes out to sing in a Kobigaan organised by the local Raja. When he returns he sees that the villagers have burnt down his house and that his wife has died.

Rohit takes Kushal to a psychiatrist and realises that there is an urgency in getting his story out of him. One sees Kushal suffer this intrusion on his mind from these memories of a past life. Rohit continues to record all that Kushal reveals to him as part of his dissertation for his University. This work also helps him to learn Bengali.

The three men – Rohit, Kushal and Anthony – have different lives but there are many threads that bind them and many similarities. In the meantime, Mahamaya is busy organising a musical event, a rock band competition, on behalf of the radio station for which she works. Rohit finds out about this competition and decides to participate. In the meantime, Mahamaya and Rohit reconnect on Facebook. On the night of the competition Rohit finally sings the song that he has written for Mahamaya, the challenge that she had thrown at him. She is impressed and accepts him.

The end has a twist that I wouldn’t want to disclose because I want the reader to see the film.

The beauty of the film lies in the way the various strands of the story are intercut. Although it sounds like a complicated story the actual cinematic narration is very smooth. The scenes where we see Anthony Firingi are shot with a warm glow and luminosity. That is why they stand out as different. The scenes where we see Kushal are sombre and the background of an utter ordinariness. The stark contrast makes it visually totally different from the scenes which take place in the past life. The two separate time periods are kept well apart. The scenes where we see the life of Rohit are placed in our modern times and in many ways the cinematic language is different. This intermingling of different historical periods and personalities is what makes this film worth watching.

But that is not all. Prosenjit as Anthony Firingi and Kushal is brilliant. He is definitely one of India’s finest actors. It is really fortunate that when this new phase in Indian cinema has dawned we have such terrific actors who are available to the directors. You have the impression that the two roles have been played by two completely different actors. The genius of Prosenjit lies as much in the quasi-mystic aura that he gives to Anthony as much as the totally ordinary man he becomes as Kushal. No make-up, no wigs, no other help from anything, stooped, unsure of himself, he becomes the anonymous library assistant. Prosenjit manages to switch off his charisma and become a nobody. And yet when he is Anthony you cannot take your eyes off him. This is the mark of a great actor.

Flaws there are and mostly in the way poor Rohit’s role has been written. Although he is supposed to be a Gujarati boy he doesn’t manage the Gujarati accent at all. He speaks in a Marwari accent and that too not very successfully. His early dialogues are not written convincingly enough. The whole part where Mahamaya’s friends re-unite with her does not give us the impression that she is the only one who is still single and could be feeling the need for a companion. Her loneliness is felt when she is with her mother.

The strong points of the film are many. Casting is one of them. The actors playing minor roles are well-chosen and leave a mark. Mamata Shankar, who plays the mother, is brief but memorable. The whole film rests on the pillars of music, both folk and modern. The scenes showing the musical debates are very well done. The moments where Anthony listens to Lalan Fakir’s song is also very evocative. It must have been weird for Prosenjit to do that scene because in another film he has himself played Lalan Fakir. Another sense of revisiting a past life, he must have thought. Screenplay, editing, cinematography, dialogues are all quite impressive.

Trivia – the director himself plays the role of Mahamaya’s boss in the film.

Revelation – I didn’t know that the Portuguese had lived in Chandernagore, neither the fact that it was called Farashdanga earlier (‘Farashi’ being the Bengali word for ‘French’). I associated the town only with the French and had always believed that Anthony Firingi was a Frenchman. 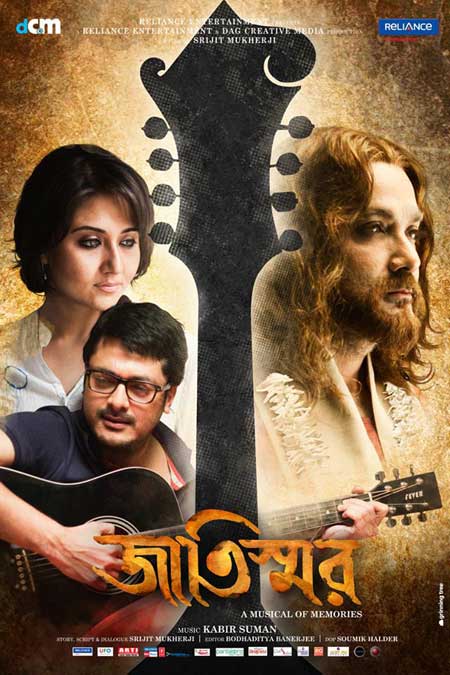