At last, we had the much-awaited screening of the film on Alexandra David-Neel’s journey to Lhasa. Although it was held very quietly this was actually the very first screening anywhere in the world.

For a long time we had thought that the lead actress Dominique Blanc was going to be present at the premiere but in the end she could not make it. Fortunately the director Joel Farges was there to present his film and speak about his experience of making it.

In spite of all the difficulties faced during the shooting it has turned out to be a beautiful piece of work. Dominique Blanc, with her years of experience and her natural grace, carries this film on her shoulders. It is a pleasure to watch her, to see her face shining with an inner strength. Particularly well-done is the scene where she meets Sri Aurobindo. The cinematographer has really put in a lot of thought into the images of this sequence.

All the scenes shot in the Himalayas are of an extraordinary beauty and Alexandra’s quest is shown a very moving way. The little Tibetan boy who played Yongden as a little boy has done a good job and the relationship between him and Alexandra is brought out with little touches of humour.

I can not look at the film dispassionately because I have seen the filming and especially the scenes where I am myself there I keep thinking of how we shot them when I watch them on the screen. My character, Uma, is an invented one. Even though the story of Alexandra spending a month in a private house in Kolkata is true, we don’t know who the hosts really were. All I can say is that this character brings out Alexandra’s thoughts on marriage and relationships in general. What Alexandra says to Uma gives us a view into Alexandra’s mind and her feminist views.

Surprisingly, in an age when travel has become so easy and is considered a pleasure, there are so many people who look up to Alexandra David-Neel as an icon and a heroine.
Behind her difficult journey lies her spiritual quest, her desire to know the invisible occult world and her great respect for Buddism.

This film will be officially released in France at the end of March 2012 and will be telecast on ARTE channel on 1st June. These dates should be put down on every cinema lover’s diary. Although it was initially made for television this film should be ideally seen in the big screen to get the full enjoyment of the beauty of the panoramic views shot in Sikkim and Ladakh. 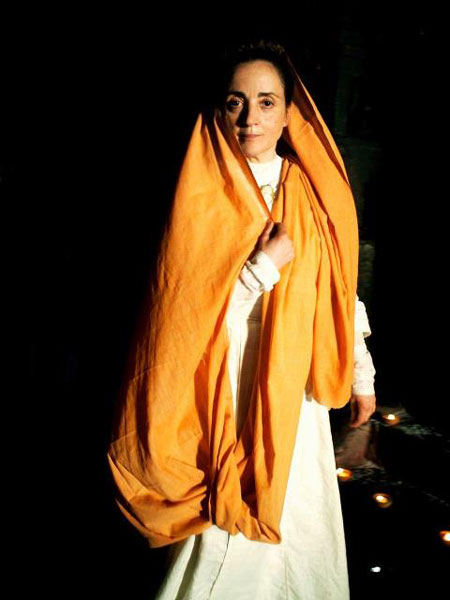