The cyclone which hit Pondy on 29th December last year brought so many trees down. One of them was the beautiful frangipani tree which used to be in Nanteuil, just next to the glass doors of our old Golden Chain Office. I used to love picking those flowers and looking at their lovely forms against the blue sky when they were clustered in bunches on the branches.

Naturally, I was very sad to see the broken tree. Soon the entire tree was cut down and the branches were piled up to be taken away. I picked up a few of those branches and took them home and re-planted them. Some in pots and some on the ground. To my utter surprise, two weeks ago, I saw buds on two of those plants and soon after the beautiful flowers appeared on those tiny branches. Strangely, the flowers were really small, almost miniature ones.

I am absolutely in awe before this phenomenon in nature. After that terrible onslaught of fury and devastation everything is regenerated, as if with a redoubled energy. That old tree had been a friend, had watched me as I typed away late into the evening, or just come in and go out from the back of the office to save time. And one day it was struck down and died and was even chopped up into little pieces. And today it lives again, stretching out to me its bunch of flowers, in my own balcony.

As I write this I realise that it is Easter Sunday! The very day to celebrate this phenomenon of regeneration, the Spring Equinox, even before Christianity was born.

May we learn something from this. The Divine is sending us messages that we can pick up if we keep our eyes and ears open. 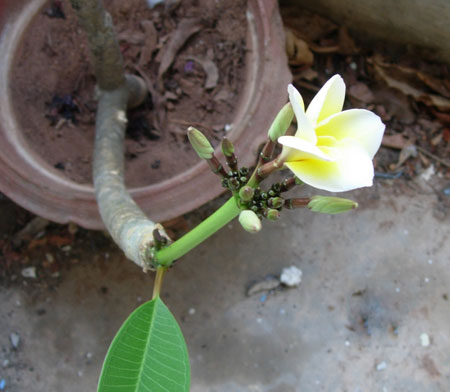 This entry was posted in Flowers, India and tagged Easter, frangipani, nature. Bookmark the permalink.