I am really sorry to say that this is not my favourite Srijit Mukherjee film. The idea is good but it has been stretched a bit too much. The screenplay is based on a true story of a Canadian boy who wanted to see Christmas but as he was not going to live that long the whole village gets together to host a fake Christmas.

In this film there is a young Bengali girl who lives in Switzerland and her one big wish is to see Durga puja in Kolkata. So her father sets out with a few friends to recreate Durga puja in Spring. He takes the help of a film producer and his team to do this almost impossible task. How he succeeds is the story of the film.

I did not at first understand that every character is supposed to be a symbolic representation of a character in the legend. So Uma is a symbol of the goddess Durga who comes from the hills (Switzerland in the film) and goes back to her world at the end. Her father is called Himadri and her mother is called Menoka. The man who will create the illusion is Brahmananda and the others in the others in the team are Arka, Borun, Gobindo and other mythological characters. There is even a character called ‘Mariam’ who pretends to be the estranged mother of Uma and with whom the father and daughter stay in Kolkata. Why is she called Mariam? Maybe because she is an unmarried woman who becomes a mother! There is also a character called Mohish Sur to represent Mahishasur. The man in charge of the electricity supply is called “Indra”. And so on.

When a film is made about film makers it usually gets boring because they have their own inside stories to tell. Also this film is full of scenes where everyone is overacting. The best part of the film is when an old director who had worked with the one who is going to create the Durga puja is dying and he wants to give some final advice.

You can see that poor Jishu is under pressure to act and please his audience so poor man he overdoes everything. His daughter is under no pressure to prove anything so she is relaxed and does her parts very well. Anjan Dutt, as the producer who is brought in to create the fake puja, does an awful job but that is also because he was given a bad script. There is too much melodrama where things could have been said more convincingly in a logically calm manner.

I was not at all moved. The idea could have been made into a better script with real tensions. I feel that the editing was not tight enough. The end is left open. We don’t know if Uma lives or dies. So there is hope that she will perhaps get well and see a real puja in her life.

The story is interesting. The actresses are all good. The participation of a few celebrities makes you sit up and watch. For me the best few seconds of the film were where you see briefly the two boys from Radio Mirchi Bangla, Agni and Somak. They have a web comedy show called “O Maa Go” which I watch every week. They are absolutely hilarious. So I was overjoyed to see them, even if it was for a few seconds.

I read somewhere that the film has had a commercial success which means that it has pleased some people. This means that Srijit has enough money to make another good film. 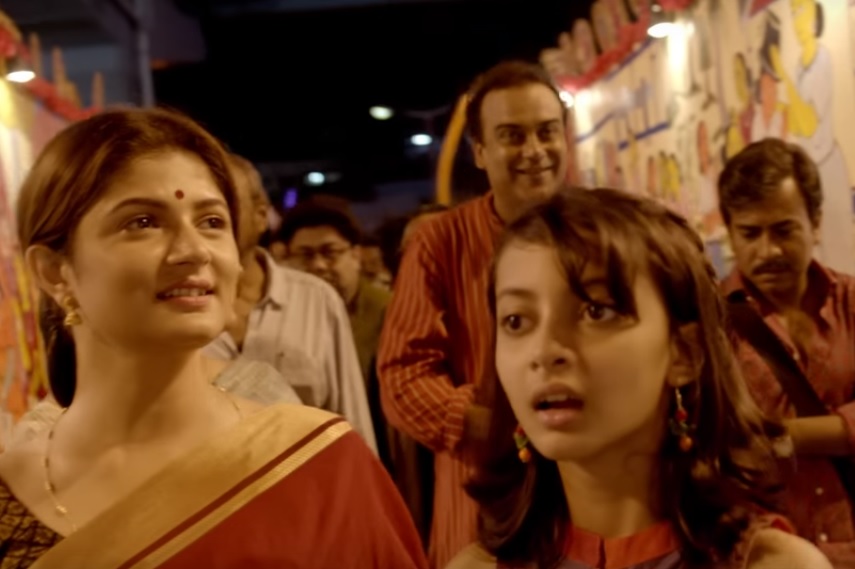 This entry was posted in Film, General, Review and tagged Cinema of India, film review, Indian cinema. Bookmark the permalink.