This is a play I had wanted to see for a long time so I grabbed the opportunity as soon as I saw the posters. We went to watch this play when the preview shows were being held, a week before the actual opening.

One would imagine that Noel Coward would be outdated by now. Strangely, his play is enjoyable today as when it was written. The wit is just as sharp and characters seem to live in one’s mind as real people. Perhaps it is because this kind of relationships are universal and are part of real life.

The story is about a divorced couple who find themselves in adjacent rooms in a hotel on their honeymoon with their respective new spouses. It doesn’t take them long to discover that they still love each other and decide to run off together to Paris. They are soon followed there by their new spouses. In the meantime the two main characters find that they can neither live with nor without each other. Their passion is as violent in joy as in disagreement. The play ends as they quietly leave while the two other characters, their own new spouses, quarrel in the apartment.

Anna Chancellor, who was in Four Weddings and a Funeral, is brilliant in the main feminine role of Amanda. It feels almost as if the role was written for her. She has said in an interview that she heard a lot of music of the period to get into the spirit of the 1920s in which it was written. But I am sure she would have been just as good even without it because the chemistry between her and Toby Stephens is so alive. Anna has that animal sensuality so important for this role but also the right energy level for the aggressive Amanda. Toby, as I discovered, is the son of Maggie Smith and Robert Stephens, and with his good looks is totally convincing as the man whom Amanda cannot let go of.

The dialogues crackle with an energy that almost lights up the magnificent decor. Not for a moment is one left to wonder what will happen next. Before you have finished laughing at one hilarious repartee the other one is already there. Apparently, Noel Coward was the highest paid writer of his times and that this play was the one which earned him a fortune. When the curtain comes down one can understand why. There is a craft that comes from having been a keen observer of the world.

A play not to be missed, specially for those who don’t know that true love comes in all sorts of packs. “True-but-only-for-a-while” and “Forever-but-not-deep” or “can’t-stay-together-but-can’t-let-go-either” and many such forms make up our world. 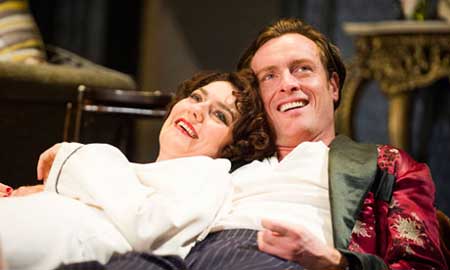