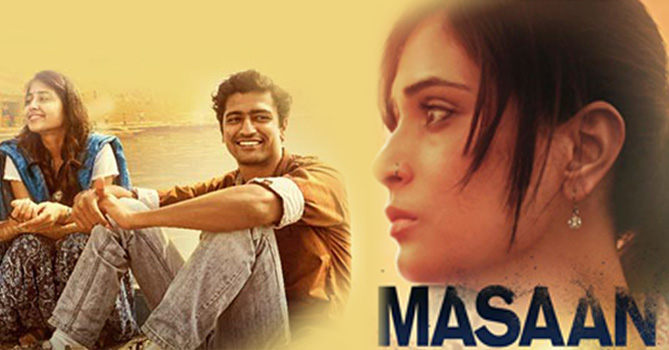 This is a film which has touched me deeply and writing about it will be easy. It shows us in clear light the dark side of life in India. It is as if a thief has been dragged out of the dark hole where he was hiding. No, in fact, it’s not that at all. It is that ugly truth which we all know but can do nothing to change, so we continue living our lives. And now suddenly, this film brings it to our notice and asks us, “What are you doing about it?”

The few comments that I had seen on twitter about this film said that it was poetic. It was this word “poetic” that led me to watch a film that was clearly connected to death and dying. After all, the title “Masaan” means “burning grounds”. After watching the film the first word that came to my mind was indeed “poetic”. Images linger in the memory and the subtle way in which the story is told leaves so much to the imagination.

I would class this film as a short story. Two stories criss-cross each other and leave you intrigued, as you watch the scenes, about how they are related. The denouement at the end leaves you with the same feeling as at the end of a short story. The body of the story is also very compact. There is not a single scene you can take out.

The true strength of the film lies in making you feel that this is all real and not a film that you are watching. This effect of reality comes from several elements. Firstly, as the actors are unknown faces, even Richa Chadda who has acted in some good films, is still a face that doesn’t have a history to it. The four people who make up the two ill-fated couples are “people” and not stars. Sanjay Mishra is a good actor with a stage background so he gives a performance which is very real. Secondly, the sets are all very life-like and not dressed up to look like commercials. And thirdly, the language they speak is the everyday language spoken by people of that region and not a contrived Hindi that Bollywood uses so that everyone can understand it.

This feeling of reality is strongest in the scenes between the young couple where Vicky Kaushal is so convincing as the small town man falling in love that you keep feeling you are peeping into someone’s private life. How did he manage that? It is a master stroke. Richa Chadda says so much with her eyes. Her inner strength shines out of her silence. The casting is perfect and each actor is good in his or her role.

Many things are clear when you find out that this film has been co-produced by several companies some of which are French. That explains the choice of subject and location. It is a well-known fact that the French have a fascination for Varanasi because of the whole story of burning the dead on the banks of the Ganges which they find very “exotic”. After the success of “The Lunchbox” the French are eager to invest in Indian films and this allows film-makers to take up subjects that other Indian producers wouldn’t want to touch.
The creative group behind this is Phantom Films, the same ones who were behind “Queen”. They are young and they easily move between writing, directing, editing and producing so that they control every aspect of the film.

Indian cinema is changing and now at last young talented film-makers are getting a chance to say what they want to and to say it in the style they want to. Perhaps we should say a big “Merci” to the French for being so supportive of this new movement.