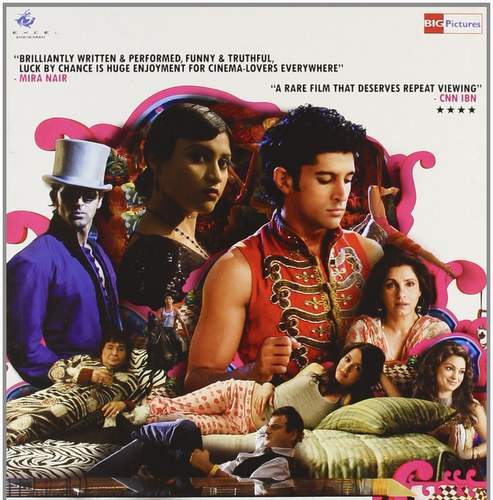 This film was made way back in 2009 but it still remains a delightful film to watch. Having recently seen an interview with Zoya Akhtar on youtube I was very curious to see her work and particularly Luck by Chance, as she referred to it several times. This was the first film she wrote and directed and it is an in-house production as her brother Farhan Akhtar plays the male lead role. Her father has written the lyrics of the few songs that appear in the movie and the music is by Shankar-Ehsaan-Loy.

The story is about the young hopeful actors who come to Mumbai and try their luck at becoming a hero in Hindi films. It shows how the film industry works, what goes on in the minds of the producers and directors of the mainstream films. Evidently Zoya knows these stories and these details as she has grown up in this industry. Both her parents were part of the mainstream Bollywood films and she knows most of the star children who became actors.

As the story progresses we see the relationships which develop in this small world of cinema and how each one feeds on the weaknesses of the others. The title of the film refers to the way luck or the fact of being at the right time at the right place can make or break the future of these actors. The casting couch, the superstitious producers, the power of the media, all find a place in this story. There is also the subplot of the star daughter being launched by her mother, full of details that Zoya must have observed around her.

Farhan does a fairly good job of portraying the young struggling actor but the one to watch out for is Konkona Sen Sharma. She gets under the skin of the character and truly brings out the difficulty of the single woman trying to find a foothold in the industry. Rishi Kapoor and Dimple Kapadia are good too in their respective roles. There is a sequence a bit like Om Shanti Om where one after the other the real male stars of the industry playing themselves appear where they are supposedly being contacted by the producer.

Zoya is a special person. She is one of the rare women writer-directors of Indian cinema, there are a few others in West Bengal, and her films have something original in them. I liked Zindagi Na Milegi Dobara because the film revolves around the idea that you live only once and you cannot afford to play your cards wrong. This film got me interested in her work. She has an insight into the minds of the young Indians, particularly the urban Indian. Zoya works with Reema Kagti who is also a fiery young woman and who is on the same wavelength as Zoya.

This film has that ring of truth because she knows what she is talking about but at the same time it has a narrative style. Zoya is a part of the new breed of directors who nudge you to think about certain aspects of life as they entertain you. Until now we have not had very many intelligent women in the world of Hindi cinema. The educated film woman is only now beginning to emerge. The film industry used to be full of glamorous women who had little or no education or who in spite of being educated were so disconnected from life that they understood nothing outside the world of their own films. At last we have women directors, producers and script-writers.

Luck by Chance is a must watch for movie buffs for the good story, good performances and Zoya’s direction.