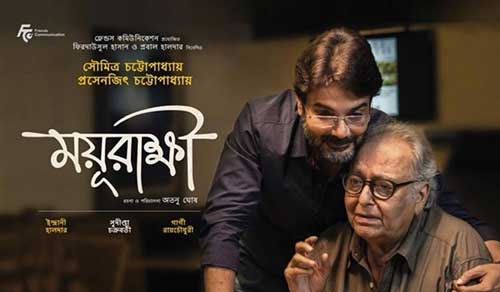 This is a film that has many similarities with “Machher Jhol”. It has the main protagonist come back to India because a parent is suddenly taken ill. There is also the theme of meeting an ex, although in this film it is quite a different kind of relationship. There is also the city of Kolkata forming a background to the story. But that is perhaps where the similarities end.

The story of the film is very simple. A son who lives in Chicago comes back to Kolkata because his father, who lives alone, has a sudden dip in his health. He is 84 and he is slowly lapsing into dementia. His mind is wandering off. The son has his own problems and does what he can to help but in the end he has to go back to Chicago.

“Mayurakshi” has a cast that is made in gold. This means that even if there is no real plot or story with turns and twists there is still something to watch, still something to feel because of the fine performances. The father’s role is played by Soumitra Chatterji and the son is Prosenjit. The main female role is given to Indrani Haldar. These three on their own create an ambiance that makes the film so watchable. Particularly Soumitra has such a presence and such fine touches.

The director did not want to make film with a story but he has created these moments that will touch the heart of anyone who has ever had to look after an elderly parent. The stark realities are there. The way a man remembers all that happened more than 2 decades ago but can’t remember what he ate that afternoon will make the viewer think again about their won lives and the future towards which we are all headed.

My friends often tell me that looking after an old parent is like looking after a child. I would say it isn’t really like that because you know that you parent will slowly grow weaker and more dependent whereas those who are bringing up a child know that the child will grow stronger and more independent. In this film you see the dilemma of the son who has to deal with his own problems and also handle this situation where he can’t do anything. Dementia is something that we still don’t know how to cope with.

The film has small episodes that bring a smile to your face. The cousin who is being so helpful at the beginning wants to migrate to the USA, the relative of the colleague for whom the character played by Prosenjit has brought a present wants to send his daughter to the USA. These moments show the reality of our Indian life. The way the young woman (played by Indrani) is setting up her own business is also a sign of our times.

As the scenes unfold before your eyes you start wondering, “Who is this Mayurakshi?” The director takes his time to tell you who she is. That itself is an interesting twist in the tale. It is a pointer about the father’s mind going back into the past. By making this name the title of the film he stresses the point about the father going back in time in his mind.

The minor characters who build up the background are very good in their roles. The care-taker lady who lives in the house remains always within her boundaries. She is caring but at all times she is an employee. Only once do we realise that she too has a family to care for.

My overall impression of this film is that there is something missing in the script. The performance of the individual actors is far more attractive than the film as a whole. Yes, the son breaks down at the airport and cries to show how hard this situation can be and yes, the father shows signs of improvement at the end, but that still leaves us with a feeling that remains an unresolved issue. But perhaps this is what the maker wanted us to feel.

Go ahead and watch it but be warned it may be at times too close to your skin for comfort. 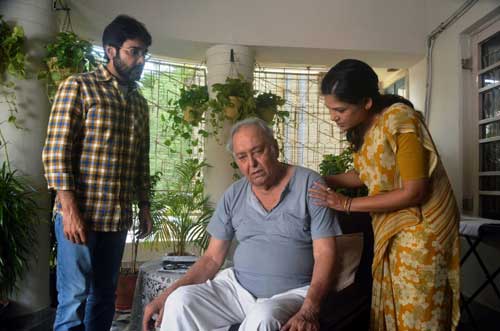