Book Review: Manik and I – My life with Satyajit Ray by Bijoya Ray

We must all collectively thank Bijoya Ray for putting into words her priceless memories. Every Ray fan wants to know what he was like as a man. There is nothing so fascinating as the little details of his outward life and his likes and dislikes. Bijoya gives us a view of Satyajit the man whom we have always known as Satyajit Ray the genius. The title “Manik and I” is fully justified. ‘Manik’ was Satyajit Ray’s nickname and in this book we see indeed Manik, Bijoya’s husband, and not the public personality that we can find in other publications.

In fact Bijoya wrote her memoirs in Bangla, in a series of chapters which were serialized in the Bangla magazine Desh which were later published in a book form. After the publication of the Bangla volume the book was translated into English by Indrani Majumdar.

This book is as much about Satyajit Ray as it is about Bijoya herself. Their marriage almost didn’t happen because they were first cousins who had a common grandfather but not the same grandmother. Bijoya Ray’s paternal grandfather had married a second time after the death of his first wife. While
Satyajit Ray’s mother was the daughter of his second wife, Bijoya’s father was the son of the first. In other words, Bijoya’s father was the half-bother of Satyajit’s mother.

Clearly Bijoya was the intellectual companion that he needed, one who shared his love for Western classical music and Hollywood films. Once he started making films she joined him and helped with all the little details which needed a woman’s attention. She not only ran his home but was also the first to read many of his scripts and to give him a feedback. She went with him to shop for costumes and accessories. She was a colleague who was always in the background.

Through Bijoya’s eyes we see Satyajit starting out on this long journey which eventually made him a legendary director, recognized the world over. We see their struggle to get the right financiers and actors, to balance their family life with his all-engrossing work. She also gives us a detailed account

One discovers in this book the large network of friends and relatives who surrounded the couple. In fact, they belonged to an illustrious family of Bengal. Satyajit was the son of Sukumar Ray, writer and artist, who is a household name in Bengal. The great Chittaranjan Das was Bijoya’s uncle – he was married to her maternal aunt. Both Bijoya and Satyajit were related by blood to many talented and artistic people. Through his work they came in contact with many others who remained loyal to them through thick and thin.

Written in a language which is close to spoken everyday Bengali and translated into an equally simple language in English, the book is an easy read. One has the impression that one is listening to Bijoya narrating her story. The Bangla version even has English words which people normally use while speaking language but they are written in the Bangla script. Words such as “highbrow” and “interesting” come up in a very natural manner as they would when people speak in daily conversation.

The good thing is that the book can be read in bits and pieces, by choosing the chapters that one is more interested in. For example, the book abounds in episodes concerning Bijoya’s life with her son. One can easily skip these if one is more interested in the stories about how certain films were made. As Bijoya married late and had only one child he became the centre of her world and it is only natural that her book has entire chapters on the details of his childhood years.

Satyajit didn’t have any of the household worries on his mind as Bijoya took care of all that, leaving him free to do his work. In fact, Satyajit remained untouched by all financial matters. Bijoya also looked after both his mother and her mother. Not only that but she also entertained all the guests who dropped in at their home. Fortunately there was always somebody around to help her out of difficult situations. As we read this we become aware that we rarely take into account the work done by a woman and her contribution to the excellence achieved by her husband.

As one finishes the last pages one understands how a couple can be so immersed in their own affection for each other that material wealth becomes only a detail. The Rays never owned a house. But Bijoya endlessly thanks God for all the joys that were given to her in her happy home, her husband’s achievements, her pride in her son, and her admiration for her daughter-in-law.

I was very surprised to find that Bijoya had the courage to speak of Satyajit Ray’s one passionate relationship outside his marriage. Although she doesn’t mention the woman by name, we all know that it was Madhabi Mukherjee. Bijoya only mentions that she was so heart-broken that she fell ill and adds, “My husband was not a saint”. But we can see how she does not let out any of this when she speaks of Madhabi the actress in such high terms. She even tells us how she helped Madhabi to dress up for her role in Charulata. In fact Madhabi wore Bijoya’s saris in that film.

Of course, this relationship with Madhabi did not last very long and all was forgiven and their happy life continued. One can understand Bijoya’s distress because not only was she five years older than Satyajit but also she did not have the looks of an actress. She was her husband’s intellectual companion. The physical beauty of Madhabi proved to be too strong an attraction for Satyajit to resist as well as her youthful charm.

The book is full of factual information which is what makes this book interesting even for those who may not be keen to know the details of Ray’s family life. Many pages are devoted to the journeys they undertook together or when he went alone to the various film festivals where either Ray’s films were being screened or where he received awards. The most interesting parts of course are the small details of how in the early years they managed to circumvent the problems of finances and technical unavailability of materials. For example we come to know that Bijoya gave her own saris and jewels for the shooting of certain scenes or how Satyajit himself did much of the peripheral work before the shooting started.

A point to note is that Ray himself designed the costumes and the décor as well as composed the music for certain films. Bijoya asks him why he only took the director’s fee when he actually did so much more. Satyajit answers that he did not want the producer to lose his money. He was keenly aware that someone had invested his hard earned money and was giving him the opportunity to create his work of art.

Satyajit Ray’s work is so rich in psychological nuances that his admirers will never miss a chance to know more about his own life. There will always be a curiosity to know more about him. And Manik and I can to some extent quench that thirst. The large number of photographs which are there in every chapter in the body of the page make the stories come alive.

Manik and I – My life with Satyajit Ray by Bijoya Ray Published by Penguin Books India – 2012, 600 pages. 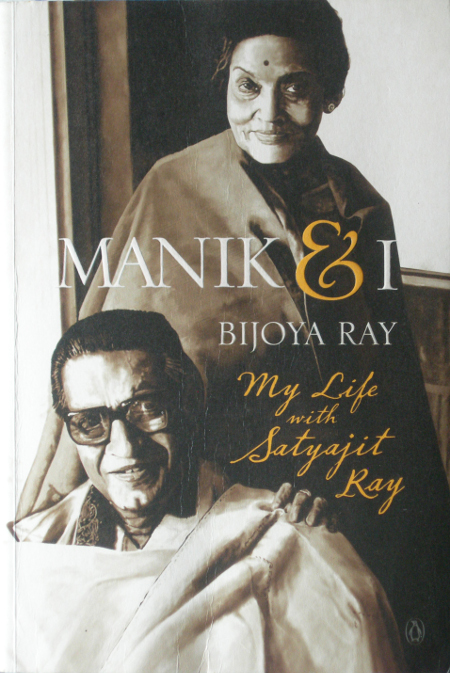 This entry was posted in General and tagged Bijoya Ray, Satyajit Ray. Bookmark the permalink.