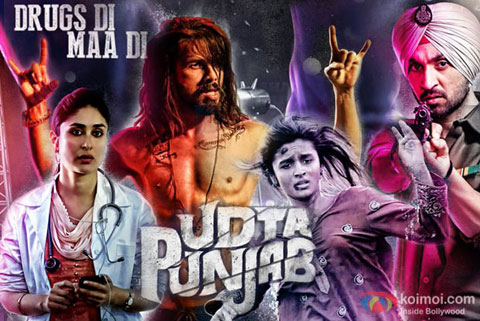 Abhishek Chaubey’s Udta Punjab has opened a new chapter in the history of Indian cinema. It set out to expose the drug abuse problem in Punjab but actually it has also exposed the outdated mindset of the Central Board of Film Certification as well as the unresolved question of piracy. In short, the film killed three birds with one stone.

The CBFC, which is supposed to certify films, has in fact been acting as an agency to censor them and to decide what the audience should watch. To everyone’s surprise it wanted 89 cuts in the film, mainly because of foul language, and also to remove the name ‘Punjab’ from the title. Everyone can now see how ridiculous this demand was. The dates of the release had been fixed and the promotion was in full swing. Blocking the release at that point was going spell financial disaster. The whole film industry stood united and supported the legal battle that the producers undertook at that point because many others had been victims of the arbitrary ways in which the CBFC had already demanded cuts in earlier films.

As if that wasn’t enough, someone leaked the film onto the internet only two days before the release. People could just download it and watch it for free. Anurag Kashyap who had spent stressful days and sleepless nights, fighting to get the film released without the cuts was now begging the public not to download the film. The stars were out on social media and explaining to the public that if they watched the film without paying for it they would actually be stopping the producers from getting back the money that they had invested. “If you want to see good films then you have to let the producers earn money,” urged Alia Bhatt.

In spite of such great difficulties, the film managed to get a clearance from the courts and opened in cinemas across the globe on 17th June. Not only that, but it has done very well at the box office. From being worried about not being able to show Udta Punjab at all or with cuts that would have reduced the film to nothing, and being faced with the prospects of not being able sell any tickets at the box-office, the producers are now celebrating a commercial success, after two weeks of its release. Not only have they recovered their money but they have also earned good profits on their investments.

Now that the dust has settled down on the controversy, everyone can sit back and reflect on the true role of the Certification Board and also on how to tackle the piracy issue. The CBFC has probably understood that the more one tries to stop a film from being seen the more the public will make a dash for it.

To come back to the first aim of the film – drawing people’s attention to the rampant drug abuse in Punjab – even that has been a success. Shahid Kapoor, the star of the film, said that he has received mails from young addicts who have decided to give up drugs after watching this film. “If it helps even one person to quit drugs, I am happy,” he said. So, all’s well that ends well.

The drug problem of Punjab is something more serious than a few teenagers falling into bad company – it’s almost an epidemic. To most people in India this may be a revelation but those who live close to Punjab know very well that this has been going on for ten years now. For the Punjabis this is a bitter truth and they know that they are fighting a losing battle. “Narco-terrorism” is a new word but it’s an old and dirty trick.

The film is about four very different characters who are all trying to fight this common enemy. How the four stories cross each other and overlap is the interesting part to watch. The screenplay, written after much research, holds you spell-bound.

The grimness of this story would have been unbearable had it not been for the antics of Tommy Singh, the rock star whose life as a singer is entirely built on his ‘highs’ and whose career is beginning to slide down. Shahid Kapoor shines in this role and Satish Kaushik, playing his uncle, provides him the right partnership in the comic relief he offers. Kareena Kapoor is a doctor who is running a de-addiction centre. She gives us the sweetness and light that grows even brighter when compared to the darkness in the life of the character played by Alia Bhatt, a Bihari migrant labour who is sucked into the hell that the drug mafia has created. Diljit Dosanjh plays Sartaj, a low rank police officer, who is trying to save his younger brother and teams up with the doctor to expose those who manufacture and sell drugs. This is his first appearance in a Bollywood films but Diljit is at ease. That’s because he is already a star in Punjab as a singer and an actor.

Abhishek Chaubey, the director, has co-written the screenplay along with Sudip Sharma. Although his name doesn’t sound familiar Abhishek has actually worked with Vishal Bhardwaj for a decade and one can see his master’s hand in his work. Abhishek was one of the writers of Omkara and one can see where he picked up the skill of blending the gritty realities of life with entertainment. Substance abuse is no laughing matter. So, how do you make a film about the dangers of drug addiction without making it preachy? When you watch this film you understand how the director has balanced the strong social message with humour and romance.

The casting of this film is remarkably successful. Getting a good cast is actually getting half the work done. Diljit is a new face and being a sikh he lends a touch of authenticity to the story. Alia is a surprise choice for this role but she has stunned everyone with her extraordinary acting skills. Once she appears on the screen she continues to hold us gripped till the end. But the real stroke of genius in the casting department is Prabhjyot Singh who plays Balli, the younger brother of the police officer who becomes an addict. Balli, played to perfection by Prabhjyot, is just so ordinary and pathetic, pimple-faced and simple-minded, that it becomes clear how the victims come from all social classes. It’s not only the wealthy rock-star or the uneducated farm labour who are caught in this trap but also the middle-class kid who has no idea about what he is doing.

This film is made by the Phantom Films team (Vikas Behl, Vikramadity Motwani and Anurag Kashyap) and they have once again come up with a creation which is entertaining as well as thought-provoking. This is the team that has given us films like Queen and Masaan. Ekta Kapoor and Shobha Kapoor are the main producers and credit must be given to them for financially backing such a bold theme.

Cinema is such a powerful medium and at last it is being used as an effective weapon to fight the powerful enemies of our society. One such is substance abuse and now there is such a well-made film that aims to shake people up and to tell them how every little effort counts.

While the film is continuing to earn money at the box-office, the papers are full of positive reviews. And in the middle of all the stories of how successful Udta Punjab has been, Kareena Kapoor has announced that she is pregnant! There seems to be no end to celebrations now.

This entry was posted in Film and tagged Cinema of India, film review, Indian cinema. Bookmark the permalink.