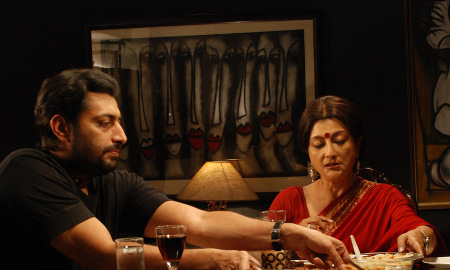 For those who are fans of Aparna Sen this film which was released in 2011 is a must-see. Her sensibility is present in many aspects of this work. Unlike her other films this story unfolds over a longer spanof time and has a greater complexity. The uniqueness of Aparna’s work is that it gives us a woman’s point of view of a series of events. And when an actress becomes a director she can bring to the finished product a degree of perfection and an insight that is not found in the works of others.

The story is about an actress past her prime who decides to take her won life after being disappointed yet another time in love. She spends the whole night remembering past events of her life and as the first light of the morning appears she decides that suicide is not an answer. But don’t think that this an autobiography of the Actress-Director Aparna Sen herself. The script is co-written with Ranjan Roy who wrote it as part of his project as a student in a movie school. Aprana then developed it and found it so interesting that she decided to get the film made and direct it herself. Of course, she has taken the role of the older version of the heroine.

In a series of flashbacks Mrinalini’s life is reaveled to the viewer and we see her evolution from a simple middleclass college girl to a mature and sophisticated woman. While we have her own story in the foreground we have the history of the city as well as of Bengali cinema in the background. One can see some parallels with Shyam Benegal’s film “Bhumika”, an actress who goes through a series of relationships, most of which are unsatisfying, but all through these experiences the woman grows as an individual.

The role of the actress in her youth is played by Konkona Sen Sharma, Aparna’s real life daughter. Even though they don’t physically resemble each other very much there is an effort to bring out the psychological resemblance and we end up believing that it is the same person. Konkona is a good actress and this role is one of her best. In fact, the casting in this film is one of its strong points. Rajat Kapoor does such a good job of the film director who can’t bring himslef to divorce his wife to marry Mrinalini. Upamanyu Chatterjee’s good looks convince you that Mrinalini’s falling in love was inevitable. Kaushik Sen plays Chintan Nair, her friend-philosopher-guide who is also perhaps in love with her. He manages the right accent of Bengali spoken by a South Indian and has the right amount of detachment from Mrinalini. 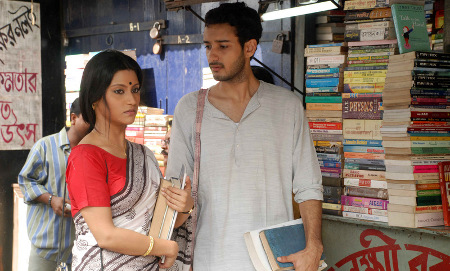 The story is set in the world of cinema but the film is not so much about her life as an actress as about her relationships. This milieu gives her the opportunity to meet and bond with unusual people. On the one hand Mrinalini has money and fame, on the other she has neither family nor a steady loving presence in her life. But we admire her for being an individual and making her own choices. Although she passes through a series of difficulties the ray of hope in the story comes from Chintan Nair who tells her that there are different kinds of love and she should not expect that she will be loved the way she wants to be loved.

Care has been taken to recreate the past through the right kind of costume, decor and vocabulary. The images are rich and varied. The music is a treat.

I was very amused that in the story Chintan Nair lives in Auroville. I don’t know how well Aparna knows Auroville but at least she has identified that it is a place where people follow an unconventional way of thinking. It is this element of quest for something beyond the mundane that redeems the film.

If one wants to start nitpicking then there is no end to finding faults but when one knows how much hard work and how many different skills are required to make a movie one can only be grateful that someone put their money into a project like this. After all, you don’t get to see a poetic film like this everyday.

The film tells you that beyond a certain point you can’t plan your life. Life takes its own course.Take what it has to offer.