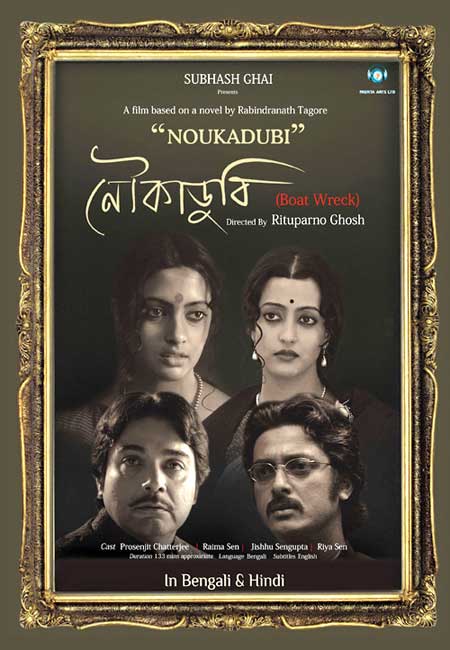 I must thank the friends who have encouraged me to write about films and particularly Bengali films because thanks to them I have seen the works of many directors I had not seen earlier. I didn’t watch Bengali films for several years and so now when I watch one I enjoy it doubly, because I notice the technical progress as well as the acceptance of subjects that one did not get to see on screen earlier.

Noukadubi was released in 2011 and was brought out in Hindi as well under the title “Kashmakash”. It was a homage to Rabindranath Tagore who wrote this story and whose 150th anniversary was being celebrated all over the world. But as I have not read the original novel I can’t say how faithfully the director Rituparno Ghosh has followed the story. He has very cleverly, however, skipped the real accident of the boatwreck and concentrated on the relationships.

This film is a feast for the eyes as the period of the 1920s has been very carefully recreated. But the feast doesn’t end with the sets – the true delight are the two Sen sisters. Granddaughters of the legendary Suchitra Sen, they seem to have finally found their rightful place at the top ranks of Bengali cinema. They have now acquired something of their grandmother’s physical beauty as well as her poise.

The casting of Riya and Raima Sen is very clever because although they are sisters in real life in the film they are not and play quite contrasting characters. Fortunately for Riya someone else has dubbed her dialogues and that has enhanced the performance considerably.

One might imagine that the story would be too outdated to catch the interest of young people today. Actually, much of it remains relevant as such relationships can exist even today between men and women. Yes, the practice of marrying someone without seeing his or her face may seem hard to believe for many today but the joys and difficulties of getting to know a new partner remains a common experience.

The story is a complex one. The hero is in a very difficult situation as he is in love with a woman who is his equal intellectually but she is wealthy and he isn’t. Unexpectedly he is married off to someone he hasn’t even seen. Even during the wedding he doesn’t see her. While returning, there is a storm and his boat capsizes. When he wakes up he finds himself on a bank and sees a woman by his side. He imagines that she is his wife and makes his way home with her. It takes him a while to find out that this is not the woman he had been married to. Then he feels uncomfortable to be with the wife of another man. In a strange twist of fate the real husband of this woman comes into contact with the woman the hero was in love with. They almost get married but finally break the relationship. In the end the two women are united with their right partners.

One can say that the story is too far-fetched. But I have seen situations in life which are so unbelievable that I don’t say any more, “This can never happen.” Absolutely anything can happen in this world. The story of the heroine, Hem-nalini, must happen all the time. The man she loves is taken away from her by the force of circumstances. And now she must start a new life. She has to pick up the broken pieces and go on, perhaps with a man who will not fit into the hole left by the man from whom she has been separated. The hero, Suresh, on the other hand, is unable to start an intimate relationship with the new woman in his life because emotionally he is still deeply attached to someone else. We see the scriptwriter’s skill as Kamala’s simple devotion for him brings Suresh willy nilly closer to her.

In this complex tale is the simple uncomplicated love of the father for his daughter. This role is played admirably by Dhritiman Chatterjee. He is an accomplished actor who had the opportunity to work with Satyajit Ray in his youth. The way he brings out all the tenderness of his heart for his daughter is really very touching. Since the girl has lost her mother, the father is also a mother to her and Dhritiman has that added something in his voice that makes this clear to us.

The two actors, Jishu Sengupta and Prosenjit, have both touched something true in portraying the sensitive characters they play. The director Rituparno Ghosh must be given his due credit for being able to visualise the whole story and getting the right balance in the performances of his actors. And one more thing – he has really given a great deal of important to voices, their timbre, volume, modulation and pace. This variety in the audio part of the experience is so rich – and this includes the music – that it more than makes up for the lack of action in the story.

Yes, in his refinement and elegance of expression Tagore is still relevant today. While Bollywood moves from crude to cruder Bengali cinema has found many shades of subtlety. 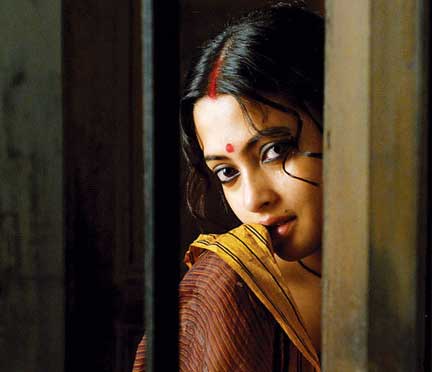 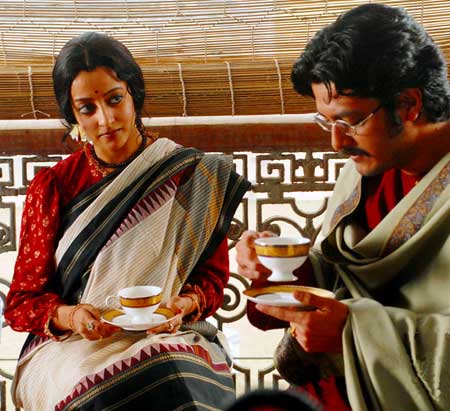 This entry was posted in Film and tagged Cinema of India, film review, Indian cinema. Bookmark the permalink.