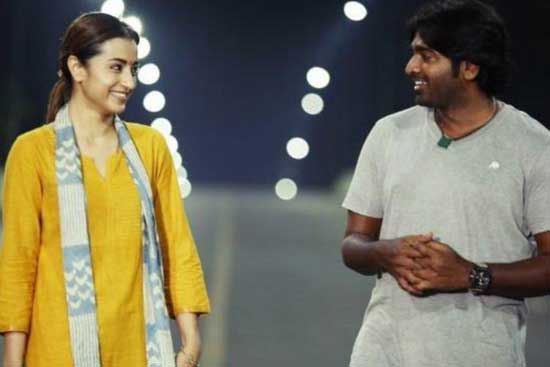 This is a film that was waiting to be made and C. Prem Kumar was the man who actually went ahead and thought of writing this script and directing the film as well. The difficult part about writing this review is having to say so much without giving anything away. In this film everything is in the details. And one cannot describe those details without talking of the events that unfold. And that will kill the surprise element. So I will only talk about the quality of the work.

Made in 2018, “96” is the story of a man, Ramchandra, played by Vijay Sethupati, and a woman, Janaki played by Trisha, who had been in love in their teens and who now meet 22 years later in a high school reunion. They have less than 12 hours in Chennai before she has to fly back to Singapore. The second half of the film is about how they catch up on all that has happened in their lives in those 22 years and why they could not be a couple. The name of the film comes from the fact that this high school reunion is for the class of 96 of that school.

In order to show how poignant this meeting is for Ram and Janaki, after two decades, the filmmaker shows us what had happened in their high school days. The 17 year-old Ram is intensely in love with Janaki but he cannot express all his emotions for her in words. She on the other hand is more brave and outspoken and shows her love for him in many different ways. After their school holidays when they finish their 10th Standard Ram doesn’t come back to the high school and Janaki finds out that it is because of his family’s problems that they have had to move out of the town where they had been living. This is how they are separated.

The girl is named Janaki by her parents because they were fans of the singer S. Janaki so evidently they encourage her to take up singing and she sings very well. This special capacity makes her stand out among the students. Much of the communication between ram and Janaki is through their eyes or through others, as it happens in real life when one is a teenager.

This part of the film, which is the flash back, is so well made that you forget it is a film. It has a realism that is rarely seen in Indian films and with absolute new comers acting the roles of the young Ram and Janaki. You completely buy their story and feel for them. They are part of a group of friends and their conversation is straight out of real life.

When the film begins Ram has become a travel photographer and lives like a nomad. He teaches photography to youngsters and we see that he is strict and exacting. When he meets Janaki in the get together he finds out that she is married and has a daughter. Their first awkward moments are very well captured as their friends just leave them and they just sit and eat together. But their feelings, that they still consider themselves a couple, are beautifully shown when she eats half the plate and he eats the other half which she has left.

The second half shows us how they slowly express their thoughts to each other and decide where this relationship will go. I will not give away the story by telling all the details because then you will not discover things the way the director would want you to. But all I can say is that the script does not shy away from reality and totally avoids melodrama.

This kind of story must happen a thousand times every year, at every alumni get together, at every re-union of old friends. Men and women must end up meeting their first love and thanks to social media must find it easy to communicate. If one or both are married then do they feel they are being unfaithful to their spouse? Do they communicate regularly? Do they meet again? Do they suffer or are they happy about this arrangement?

The name of the film tells us that Ram and Janaki belong to that generation which was born in the 1980s and their mindset comes from that era. Someone born 20 years ago will behave in a completely different way. Perhaps the millenials will not be able to understand why two people give so much importance to their first love and are still so much attached. The story is deeply rooted in India and in South India in particular where you just could not go against your parents’ wishes when it came to the subject of marriage. Janaki is married but she had no choice in that. Ram has remained unmarried but Janaki absolutely wants him to get married and not remain single because of his love for her.

The film deals with the subject in a matured and realistic way. Prem Kumar the writer-director says he knows a few people who are like the ones he has portrayed. There are many who are married to someone but who remain emotionally bound to the first person they had fallen in love with. The way Prem Kumar tells the story is admirable. You see how observant he is and how he has seen the little details of life.

Trisha and Vijay Sethupathi get under the skin of the characters they play. They find the right note of never overdoing anything. The entire second part is a series of dialogues and they hold the attention of the audience with their presence. Prem Kumar has said that he chose Trisha over other actresses because she is a Tamil woman and she would understand the subtext of the dialogue where sometimes the characters say very ordinary things but actually mean so much more.

What I particularly liked is the way the characters are named Ram and Janaki but never is there any reference to the divine couple Ram and Sita to underline that they are destined to be a couple. It is left to the subconscious level of the mind to do its job. Rather there is a scene where Ram tells Janaki, “If I marry you you will become ‘Janaki Ramachandra’ (the name of MGR’s wife after she married him)” which I found very funny.

I highly recommend this film to everyone but I don’t know how you can see it. I saw it on a flight. But please don’t watch it on a fight because, as I discovered, they often delete scenes or dialogues in order not to shock their aged and conventional-minded passengers. 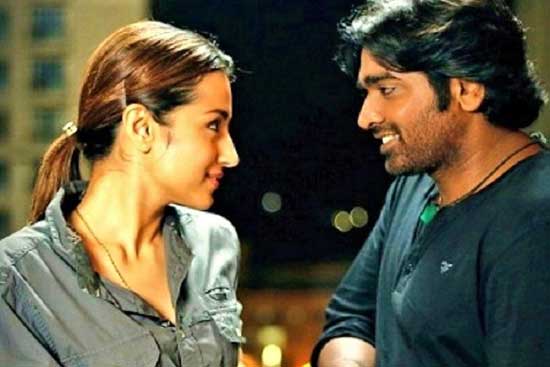