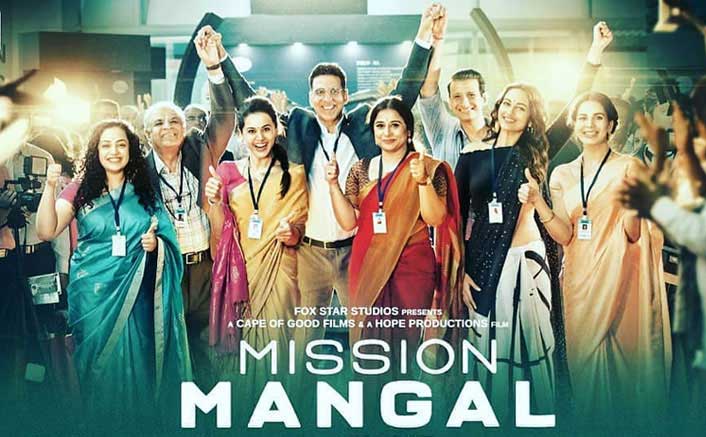 This film celebrates the Indian woman scientist who has remained largely unknown. While we were all admiring the movie stars the Indian scientist remained in the shadows doing her work quietly. She is an expert in rocket science but she is also that woman in a beautiful sari and with a bunch of flowers in her hair. She is trying to figure out the life problems that every woman has to deal with while she also tackles complicated scientific problems. She is thinking on several tracks at the same time – the home, the problems of bringing up children, relationship problems, cooking, cleaning and everything that comes in between.

“Mission Mangal” could not have come at a more appropriate moment. The Chandrayaan 2 lander missed its soft landing but there must have been thousands of Indians who had at least a rough idea of just what goes on in the preparation of a space mission. All those who saw the film have realised how the simple people who are behind these extraordinary feats of the human mind are so humble and so unassuming.

Vidya Balan was born to play the role of Tara Shinde. She is the woman next door, the lady who has to run a home and handle teenage children. She is the average Indian woman who has to use her common sense to survive. I was thrilled to see her on screen because although she is overweight she looks lovely in her saris. She carries this role which has no glamour in a way that allows you to focus only on what she has to say rather than what she is wearing. We believe in this character because we can all relate to her because she looks like the average Indian woman.

There are other women characters who are all dealing with some sort of personal problems. Sonakshi Sinha plays the role of the young scientist who wants to go away to the USA rather than live in India, she is more free-thinking, more “cool”. But she is very much an Indian woman. All the other women embody some aspect or the other of the average woman and bring home the point that we have no idea what each one is dealing with internally as they grapple with responsibilities that concern the whole nation.

The script is very well-balanced. You never feel the weight of the scientific matters as you watch this film. It has been made accessible to the common man who otherwise would not be able to get into that world. Such stories could not have been told before but now Indian cinema has changed so much that now we can talk of real stories of courage surmounting difficulties. Now we look back at those extravagant loves stories and think “How could we have gone on with that for so long?”

Of course, it is an Akshay Kumar film so he gets all the punch lines. But his bravado and intense talk balances the story and drives it forward. There has to be someone crazy to balance the story of these reasonable women. This kind of film will do much more to teach Indians about gender equality and mutual respect between genders than any amount of propaganda. The silent message is louder than any sentence that can be pronounced with shouting and dramatic music. Example is all we want. When the image of the item girl will be replaced with the woman scientist then we will have a better society.

The photo that went viral in 2014 when the Mars Mission was successful remains in everyone’s mind. It showed a group of women in bright saris and jasmine flowers in their hair. “Can they really be scientists?” everyone wondered, but only for a brief while. Suddenly the Indian public knew how many women were involved in our space research work. It was only a matter of time before that simple photo could be expanded into a full-fledged film.