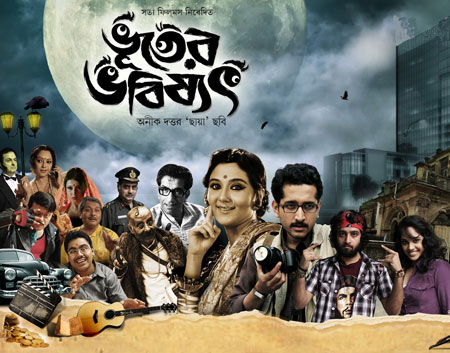 Bengali is a language which lends itself so well to humour that it is a pity there aren’t more comedies made by the Bengali film industry.

The story is about the old heritage buildings of Calcutta being in danger of being pulled down. An ad film maker goes to a very old house to see how he can use it for his next ad shoot. There he has to spend a long time waiting for his cameraman. During that time he falls asleep and probably goes into a dream. During this, an unknown man comes to him and tells him the story of this old mansion and how it has become the home of a large number of ghosts who have nowhere else to go. In the end the man also tells him how certain developers were planning to buy this house to demolish it and make a shopping mall and how they managed to rescue it. Before going away he asks him to make a film on this story. The film ends with the ad film maker actually making the film made on that story.

The film focuses on the real issue of Calcutta’s heritage slowly disappearing. It also shows how Calcutta has been inhabited by different kinds of people starting from the Government Officers of the Britishh Raj to the Marwaris and the Bihari rickshaw-puller. The whole history of Calcutta is summed up through these characters who play the ghosts.

My favourite character in this film is the actress Kadalibala. She has really brought out the quintessential Bengali woman of the 1940s. Not far behind her is the Marwari property developer. The actor who plays this has a great comic timing. All the actors have been well chosen.

The element of humour has many shades but the most charming is the use of rhyming couplets. This could be an allusion to Sukumar Ray, the father of Satyajit Ray, whose book Aabol Tabol is such a gem. In fact, this film is full of allusions to Satyajit Ray because the film itself is a homage to the legendary film maker. There is even a scene where the ad man’s mobile phone rings and we at once recognise the ring tone which is the song from Gupi Gayin Bagha Bayin – “bhooter raja dilo bor”.

I would heartily recommend this film to everyone as it is really something off the beaten track. One has had an overdose of films made on relationships, so, seeing something on the city of Calcutta and its multicultural past and present is totally refreshing. The message behind the film is something we rarely hear in the media. It is a well-known fact that Indians don’t have any sense of history but now the situation is really serious with every businessman wanting to build a shopping mall. The beauty of Calcutta lies in her heritage buildings, which, once gone, can never be recreated again. In fact, this is true for all the metros. The unspeakable ugliness of Indian cities only reflects the ignorance of the Indians as a whole about the importance of beauty in our collective life.