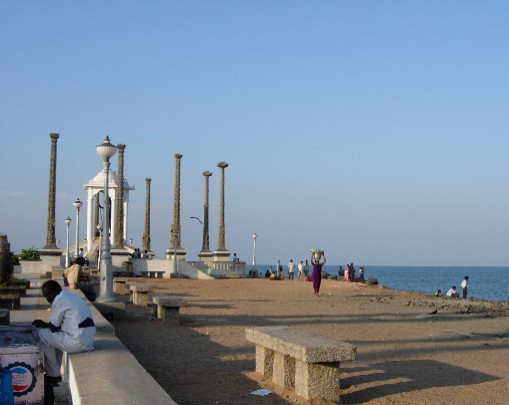 When they announced that there was going to be a Lit Fest in Pondicherry it was met with some scepticism. A friend of mine told me that the person who was behind this project had never done anything like this before so she could not see the practical side of things. This is why I wasn’t in the least surprised when the event was moved from July to December.

A week ago, I was given a printout of the schedule of this festival at the Alliance Francaise. The man who handed it to me said, “This is not the final programme. Things are changing every minute. So please check the website before the Fest begins.” But what caught my attention was that there was to be a press conference at the beginning of the Lit Fest which was shown as an event open to all. There were celebrities like Ségolène Royal and Shashi Tharoor who were supposed to speak.

This was too good a thing to miss so I noted it down in my diary. Absolutely by chance I was invited to a party on 30th November where Fariba Hachtroudi (the organiser of the Fest) was also present. I went up to her and asked if indeed the schedule for the week had been finalised. Very confidently she told me that the event was starting off on Saturday 1st December with the famous much-advertised press conference. I was really surprised when she told me that it was going to be held at the French Consulate.

I know the French Consulate well so I also knew that an event held there is never open to all.

“Wasn’t it supposed to take place on Sunday?” That is what it said on my printout.

“No, no,” she answered with an air of confidence. “It’s on Saturday at the French Consulate.”

“Is it really open to all?” I asked her to be absolutely sure.

“Are you sure?” I asked again.

“I am telling you that it is,” she said and walked away a bit irritated.

I reached the Consulate at 2 pm sharp on Saturday. The security guard asked me if I was on their list of invitees. I told him that I was told that this was open to all.

“Do you work for any newspapers?” he asked me.

“Then you can’t go in,” was his answer. “This conference is only for invitees and the press. These are my instructions.”

As I took my scooter and got back home I understood that my friend who had told me how disorganised the whole affair was knew the inside story. The various people involved in the organisation haven’t spoken to each other and crosschecked anything.

If you look at the details of the schedule you realise this is a Lit Fest only in name. In actual fact this is being done so that some brands of wine can be promoted, some hotels can be advertised, some celebrities can have lunch with some other celebrities, some dancers who perform at any big event can get a chance to dance and some people who don’t have much else to do can all gather and have a jolly good time. And all this will be written about and it will fill up the pages of the magazine section of some newspapers.

And some people can become famous for being famous.

Literature, what’s that? And haven’t you heard that books are going to be obsolete in a couple of years?