Since the Olympic Games happened only 2 years ago in London the Commonwealth Games which took place in Glasgow, again in the UK, looked like a miniature version of it. The hero of the Olympiad, Usain Bolt, was there once again as were the British gymnasts and divers.

The opening ceremony, as expected had a lot of Scottish pride and tartans. But once the games began it was a flow of many colours and skills. I watched the gymnastics and diving events and was most moved to see Indians participating in these. Many other countries such as Malaysia, Canada and South Africa were present in these games, who had not been so visible in the Olympics. It took me a while getting used to seeing Scotland and Wales were competing as independent groups.

My focus was on gymnastics and diving and I watched much of it on the BBC website live. I was absolutely spell-bound by the performances in men’s events. It is really amazing how far the human body can go in its efforts to cross the boundaries of capacities. In control, balance and suppleness we have truly progressed. I say “we” because the whole human race is represented by these sportmen and women.

In women’s gynmastics I was delighted to see a young Indian woman win a medal in vault. This was a historic moment in Indian Sports. I have myself been a keen gymnast so this was a moment to cherish. Dipa Karmakar’s smile will remain in my memory for a long time. The other girls were impressive, specially the three English girls who won gold, silver and bronze. But “impressive” is the only word that comes to mind because the grace that epitomised gymnastics is gone. The joy of watching the women gymnasts embody beauty and grace was something that nothing can replace.

That grace I now find more in diving than in gymnastics. Synchronised diving has the precision and beauty that is something superhuman, something that makes one believe that we can go beyond ourselves. It took my breath away to see Tom Daley perform his 10 metres platform dives. Diving is a fantastic combination of courage and beauty. How lucky are today’s children that they can watch all this so easily and be inspired. This is possibly the greatest benefit that the Games bring: so many young people turn to sports, channelising their energies in a constructive direction.

The closing ceremony was well designed and enjoyable. The Australians with their special energy presented their country and the next venue for the Commonwealth Games in a brilliant manner. There was such a sense of togetherness and friendship that when they began playing Auld Lang Syne on the bagpipes it felt as if it had come to an end much too soon.

To sports lovers all over the world the countdown has already begun for the next Olympic Games which are only two years away. 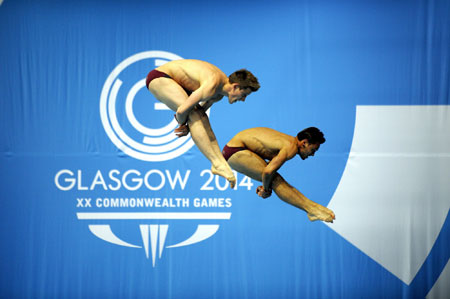 This entry was posted in General and tagged Commonwealth Games, Dipa Karmakar. Bookmark the permalink.