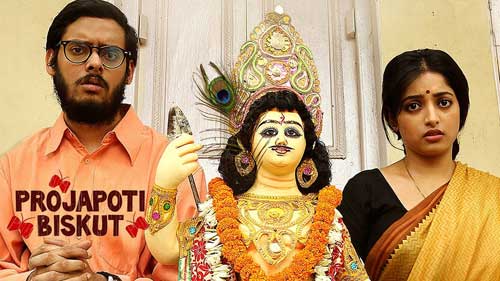 Bengali cinema is now in such an interesting phase that I watch out for any recent releases and I am often pleasantly surprised by the content. This film is produced by Shibo and Nandita who are usually seen as directors. The director here is Anindiya Chatterjee. The lead pair are new comers Esha Saha and Aditya Sengupta who have done a good job of their rather difficult roles.
The subject of the film is a very interesting one. The difficulties of a married couple trying to find opportunities to know each other while living within a joint family is something so well-known to Indians but so rarely discussed in cinema. Marriages are arranged in India but in today’s world it is important for the man and the woman to also fall in love. The whole question of compatibility and getting to know each other is so important but the family does little to help out. This happens mainly because the older generation never had this problem. Marriage was a different ball game then.
The story is about a couple who has been married for two years and a half. The problem facing them is that they have not yet been able to have a child. When we see the couple we can see that they have little in common and that they are not particularly attracted to each other. The man, in his emotional need for love even reconnects with his ex-girlfriend on Facebook. The woman gets bored in this joint family where no one really accepts her. Then the couple goes through all that they can to get medical assistance to conceive. But they get no results so they decide to adopt a child. But even that doesn’t work out. In the end the heroine goes back to her parents’ house and then the story takes a new turn.
The writers have taken great pains to create relatable characters. All the minor characters are very well-defined so that the viewer gets a feel of the real world in which this real problem is set. The mother-in-law has very clearly defined likes and dislikes. The father-in-law has his own set of weaknesses and strengths. The parents of the girl are also very relatable. Parijat, the young friend of the heroine is also straight out of the milieu of young creative people.
What I enjoyed most was the way Shaon, the heroine, takes a strong decision to go away and try to make her life again. The way she changes and becomes who she was before getting married really touched me. The one thing she can fall back on is her ability to write TV scripts. This is her secret activity that her husband’s family doesn’t know anything about. It takes courage to leave a comfortable home and live with little and alone. Perhaps Shaon wants to become like her friend who works in the TV industry and leads such a free life that she meets like-minded people. Perhaps she hopes to find a companion through her work once she is out of the joint family.
The film ends with the couple falling in love and this time there is a true connection between the two. It is this process of the two young people finally being able to open themselves to each other that is very well captured. There are moments of beauty there that make the film stand out of the ordinariness in which it is caught right from the beginning.
A woman who wants to find her self-worth and her freedom is rare in our society but the desire to be oneself is there in every woman. This film also delves into a man’s attempt at making himself desirable to his wife. This is something quite forgotten or neglected in most men in India. The transformation that the couple goes through at the end is very interesting.
The film has its flaws. The minor characters sometimes look like caricatures. There are places where the pace of the film slows down. But I would overlook all this because the main theme is very new in its approach.
This film is very relevant to our times and gives us a glimpse of what the future of India will look like as couples will seek greater emotional fulfilment in marriages. But the question that popped up in my mind as I watched the film was “How long will the institution of marriage survive?” I have a feeling that the young will find it easier to just live together and one day that form of companionship will become as valid as a marriage even in India.
Go ahead and have a watch.

This entry was posted in Film and tagged Bengali film, Cinema of India, Film, Indian cinema. Bookmark the permalink.