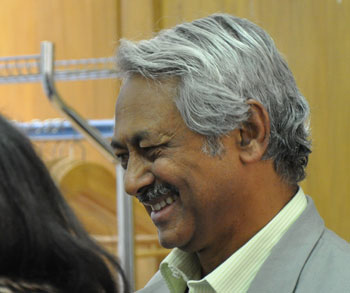 The beginnings of South Asian Cinema Foundation go back to January 2000 when over a pizza Lalit Mohan Joshi suggested to fellow film-buffs and experts Derek Malcolm and P.K.Nair that an organisation should be set up which would promote artistic Indian cinema in the UK. For almost a decade now that effort has been going on to hold film festivals and workshops as well as to honour outstanding filmmakers. The foundation also brings out a journal, each issue of which takes up a different theme.

The person behind all these activities is Lalit Mohan Joshi, Director of SACF, editor of the SAC journal, who is also a senior broadcaster who works as a freelancer for BBC Hindi service. He is joined by his equally passionate family in this endeavour he has undertaken.

“Here in the West people think there is nothing beyond Bollywood cinema in India. That is a myopic view and that view needs to be corrected,” he says, adding “Our mission is to build film culture, to promote meaningful cinema.” SACF has set up an archive where one can consult back issues of their journal, and go through a collection of nearly 300 film classics of South Asia. One can also buy the back issues of the SAC journal and other SACF products.

The foundation has instituted an award – Excellence in Cinema – which is given once every two years to a filmmaker who has made a mark. “Even if he has made a couple of films but if they have a timeless quality then we like to recognise that and honour him,” Mr.Joshi points out.

Making full use of the presence of the recipient of the award in London SACF organises the screening of his films and other activities where the filmmaker interacts with participants and the audience. This makes him accessible to the viewing public.

This year the award is being given to Girish Kasaravalli who is considered the Satyajit Ray of Karnataka and who has won the President’s Golden Lotus Award in India four times. He has made barely 12 films in his 35-year career, putting all his attention into the details of his creation and making films with his limited means. He will be felicitated at the Nehru Centre on 9th October. Five of his films will be screened at Watermans over the next 4 days and there will also be a Masterclass conducted by Farrukh Dhondy on the 11th at the University of Westminster.

On the 12th at the Nehru Centre another eminent film personality, Chandraprakash Dwivedi, will speak and answer Lalit Mohan Joshi’s questions. Dwivedi will also receive a Cultural Catalyst Award from the SACF for his commitment and projection of India’s rich cultural heritage in his TV serials like Chanakya and the forthcoming Upanishad Ganga.

This annual event organised by the SACF is a good occasion to find out more about regional filmmakers of India whose films go beyond entertainment and speak of deeper thoughts and sentiments. One is not likely to find these films at the local DVD shops but they bring a note of realism which nudges people to sit up and think. SACF is a broad umbrella which also screens films from Pakistan and Sri Lanka.

“The only way to encourage people to make meaningful cinema is to create an audience which understands that genre of films,” says Lalit Mohan Joshi.

This entry was posted in Film, India, London. Bookmark the permalink.