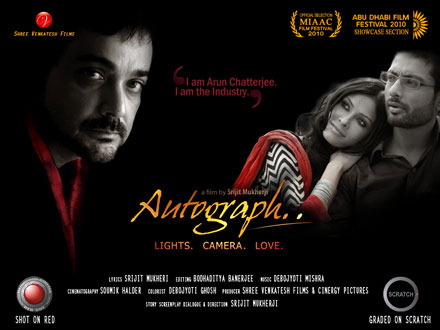 This film was presented at the London Indian Film festival last year but I didn’t see it then because I was busy with an exhibition. When the DVD came to my hands I was eager to see what made the organisers select this among so many other films for the festival.

The script is a homage to Uttam Kumar and Satyajit Ray because it is about a film-maker who wants to re-make Ray’s “Nayak”. I saw Ray’s black and white film quite recently so I could catch the references to that film. The main roles are enacted by Prasenjit, Nandana Deb Sen and Indraneil Sengupt. In keeping with the changing times the journey is not by train but in an aircraft.

It is a film within a film and the plot includes the secondary thread of the actors falling in love as they shoot for the movie they are making. Nothing unusual about that except that the heroine is the girl-friend of the director. The tussle between the two men comes to a head when the director leaks to the media a private moment of the hero which has been accidentally taped. The woman leaves her boy-friend with whom she has a relationship of friend-lover and who has betrayed her. The film ends with producer, who is also the star of the film that is being made, deciding to scrap the film altogether.

The film is as much about the profession of actors as about relationships between men and women. It makes us reflect on what happens when people are ready to sacrifice their love on the altar of success. The young director is too eager to make a name for himself and start a career in the world of cinema. When the temptation comes up before him he can not resist taking that step where he puts the woman who loves him in a very difficult position but which he thinks would generate a lot of publicity for his film. In the end he loses everything – the woman as well as the film.

Nandana Deb Sen, the daughter of Amartya Sen, has handled this role, which demanded a very modern outlook, rather well. The urban woman who has a live-in relationship has a crush on the hero with whom she is acting. Nandana has the right sophistication and has kept the performance on a dignified note while giving to her character the cheerfulness that makes her so endearing.

Prasenjit is a seasoned actor and his acting has the nuanced expression that an artistic film like this could bring out. Indraneil, on the other hand, has a role which the script-writer could not quite polish. The character has too many inconsistencies. He is supposed to be a new director and yet he is harsh and rough with his actors. He talks with such over-confidence, towards the end of the film, with Prasenjit that one starts wondering if a person in his place would behave like that. He never seems to have doubts about his own capacity to direct a film. A person who has only directed a documentary would face some difficulties in directing a feature film. This difficulty is never shown in the film.

Ray’s film “Nayak” dealt with the insecurity of the actor. In this film too we see the human side of larger than life icons who become like demi-gods to the common man. The young spectator may even want to see Ray’s film to find what it was that was at the source of the making of this film.

The music of this film is modern and interesting and blends harmoniously with the theme.

Bengali cinema has indeed got back to the thinking viewer. 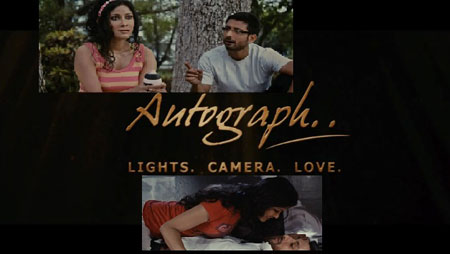 This entry was posted in Film, India and tagged Cinema of India, film review, Indian cinema. Bookmark the permalink.