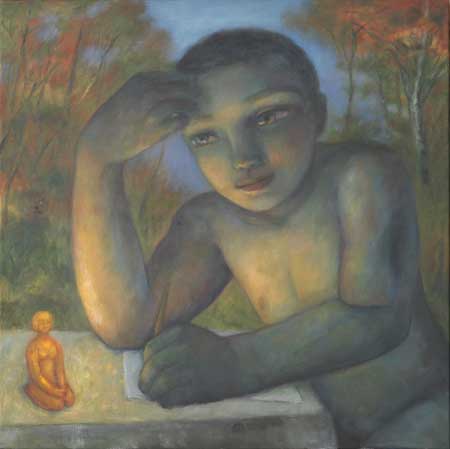 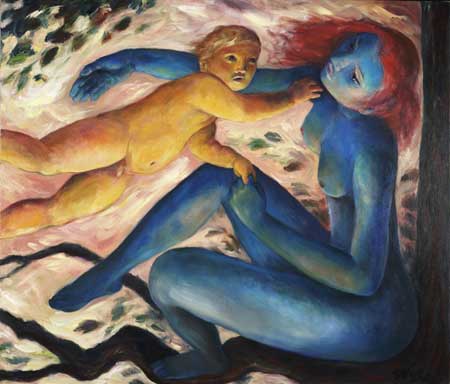 In an age when art defies definition and seems to be beyond the common man’s understanding, this artist’s work comes as a breath of fresh air. Sharon Yamamoto’s paintings answer many of the questions with which we are confronted as we go through life. There is a clear idea in each of her paintings and it is communicated in an effortless way. Her recent exhibition, after a trip to India, only confirmed that her source of inspiration is the same spirituality that binds all human beings.

Sharon Yamamoto travelled to India in 2009 and discovered for herself the land about which she had heard so much. She and Tony, her husband, set out with very few expectations and they were constantly discovering things. She said, “We were surprised in the best way on our first trip to India by so many things – the kindness of people, the sophistication, the humour, the graciousness and the wealth in all ways, material, spiritual and of relationships.” During her short trip she managed to see quite a bit of India’s ancient art, the high point being a visit to Ajanta and Ellora, where she could admire the Buddhist cave paintings and where she was impressed by the monumental aspect of Indian sculpture.

The artist, now in her early sixties, has lived for three decades in the United Kingdom but Sharon Yamamoto is actually a third generation Japanese American who, in her upbringing and education, is more American than Japanese. After she graduated in fine arts from the Illinois Wesleyan University she has had a long career in teaching art alongside her life as an artist. She is married to an Englishman and has brought up her children in Britain. Keenly interested in the history of religions, she studied for sixteen years at the College of Psychic Studies in London and draws on this knowledge when she paints.

Although she is the product of several cultures Sharon’s work is entirely individual and doesn’t look like the outcome of any one of these influences. She can draw inspiration from her Japanese roots as much as she does from Walt Disney’s early animations but in the end her paintings reflect her own thoughts. Her work looks deceptively simple but it is neither naïve art nor children’s illustration, not even religious art. It is something beyond all this even though it has elements of all of these styles. Her subjects spring from the experience of daily life, from the common human experience of trying to live in harmony with oneself and with the world.

Recently Sharon exhibited her work at the Holland Park Icehouse Gallery in London. Hidden away behind tall trees and flowering bushes this venue was perfectly suited for Sharon’s paintings. Her works, which always carry an atmosphere of peace and harmony, are peopled by humans, animals, birds, trees, streams, oceans, the night sky or the dark woods. There is often a narrative element which gives to her work that fourth dimension: time.

Talking of the recurrent theme of the child in her paintings she says, “I don’t consciously create symbols, it happens on an unconscious level. However, I am aware of the universal symbols. A child represents the unencumbered soul before the personality takes over.”

When you have had a good look at what Sharon Yamamoto has created you understand that you are looking at her inner world, or perhaps at the collective inner space of all human beings. One finds a connection to things that can not be explained by rational thinking and certain concepts, such as the idea of the soul, man’s true self, come naturally to her. This luminous being which is recognised by all eastern systems of thought – known as the atma to the Hindus or the ‘Buddha nature’ to the Buddhists – is there in almost all her paintings.

She says, “My paintings come through me, not from me.” Interestingly, although she has never lived in Asia, she seems to have a natural attraction to the kind of thought that has always been considered more Eastern. She brings into sharp focus the wisdom of our inner life, that part of the human experience which gets lost in the hurly-burly of the outer life. We have become so much a part of the society which is in a hurry to produce, consume and create statistics that we have lost sight of who we really are. Sharon reminds us that we are souls who are living an experience of earthly life through which we fulfil ourselves.

Like all artists, Sharon Yamamoto has her favourite themes. Many of her paintings speak of journeys, inner journeys of self-discovery while other paintings speak of the two opposite parts of our nature with which we have to live – the practical and the creative, the destructive and the compassionate, the beastly and the angelic. The themes of some of her paintings are also about nurturing and loving and finding happiness in the little joys of life, pointing out to the viewer the significance of the seemingly insignificant. Not only does the theme of the mother and child come back in the various collections but also her work is full of compassion while she touches on the common feeling of insecurity, of not knowing what the future will bring for one’s children, which is at the heart of every parent.

One of the most unique features of Sharon’s style is the way she uses light. “Light itself is a symbol,” she says. In all her works the central figure is lit up by an object or another figure and that brings out the meaning of the painting. One of her recent works shows a little being sitting before a human figure and casting a golden glow on him. The title “Muse” explains it all. Often it is a golden child who, with the light that radiates out of him, guides the main figure of the picture. Her paintings engage us emotionally and intellectually while we are appreciating the beauty of forms that she has created.

“Every human being is potentially an artist,” she says, “but only some go ahead and develop the skill one needs to express oneself.” But having developed that skill to perfection she chooses to allow her inner voice take precedence. She admits that she shuts out her reasoning mind when she starts a painting and allows the image to come out of her in a spontaneous manner.

As you go through Sharon Yamamoto’s work you become aware of the true role of an artist in our human society today. They are the ones who should uplift us from the mundane and the ordinary and reveal to us the reality that is hidden behind what we see with our physical eyes. Sharon is an artist who stands apart, not only for what she expresses but really for what she can see.

This entry was posted in Art, London and tagged Art, painting, Sharon Yamamoto. Bookmark the permalink.