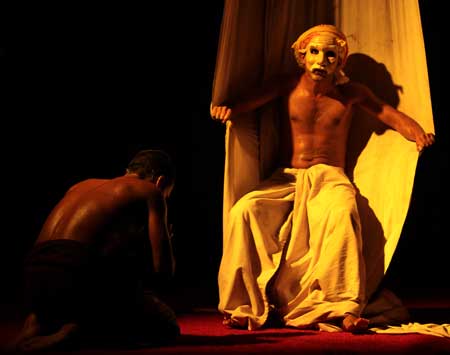 At last we have the best of French culture right here in Pondicherry. One can now go and watch a play and follow it up with a dinner out. What used to be “Salle Jeanne d’Arc” is now called the Indianostrum Theatre and just next to it is the “Café des Amis”. The experience of a perfect evening out is now within our reach. Let us first talk about the theatre because it is an important new element added to the cultural scene of Pondicherry. The group Indianostrum is headed by Koumaran Valavane whose dedication to theatre is really out of the ordinary.

I went to watch their production “Kunti and Karna” which was quite unusual and very impressive. The text of the play was made up of lines taken from Tagore’s work on the same theme and added to it are lines taken from Jean Claude Carrière. We also hear shlokas from the Bhagavad Gita.

The production is a very physical one. Karna expresses his inner angst through movements which are either in the Kalari style or in the Silambam, which is inter-cut into his very intense dialogues. There are only two actors. Karna is played by Vasanth Selvam and the other actor, Cordis Paldano, does all the other roles such as Kunti, Arjuna, Parashuram, Krishna etc. The entire production is very bare – there is practically nothing on the stage. There is also no music and very little light.

“I wanted to go into Karna’s inner darkness,” says Koumaran. He believes that theatre should be disconnected from music as he thinks that with music it is easy to manipulate the emotions of the audience. The viewer must find the real emotions by himself, in his own heart.

I was a bit surprised to find that there were two tanks of water at the front part of the stage. There are scenes where Karna is inside that water. “I absolutely wanted to have water in the scenes because water plays a very important role in Karna’s life. He was abandoned on a river and picked up by his foster-mother from that river. In his inner longing for his mother Karna goes back to the time when he was within her, floating in the fluid of her womb.”

What the theatre lacks in terms of comfort it amply makes up in the content of the productions. This play will be performed several times again and those who haven’t seen it should put it into their diaries right away. Even if the style of this performance is not what one is looking for, there is an atmosphere of sincerity and intensity that is unique and hard to find in Pondicherry. The evening I saw it there were only six people in the hall and yet, the actors were giving their most heartfelt performance as if it was for a crowd of several hundreds. That I have not seen anywhere else.

This entry was posted in India, Theatre and tagged Theatre. Bookmark the permalink.